Back to articles' page »

When Babes Hanchett and a few of her Hana friends started talking about "preserving the songs of Hawaii" through the singing group "Na Leo O Hana" she embarked on a new career which spanned two decades. In 1971, she and her Board of Trustees incorporated the Hana Cultural Center.

This year, we celebrate the 25th anniversary of encouraging the Hawaiian Renaissance and collecting artifacts of the Hana Coast. In 1979 the organization published their first newsletter and enthusiastically announced:

"At last, the Hana Cultural Center has a home. We are pleased to announce, in this very first edition of our newsletter, that we have recently acquired the old Hana Courthouse from the County of Maui to use for meetings, cultural activities, and as a repository for our historical materials."

The newsletter listed 154 members. The old Courthouse was given much needed TLC and new paint to put it into useable form. 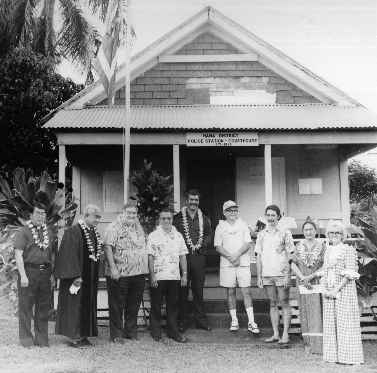 Being the 10th anniversary, 1981 was another very important year for the Cultural Center. The planning for a Museum building was an impressive expansion for such a small organization. Groundbreaking for the museum was celebrated on September 30, 1982 with the help of Mayor Hannibal Tavares and ministers from several Hana churches. With Coila Eade as the "general contractor" the construction proceeded quickly and on August 21, 1983 the opening blessing was held with a large part of the Hana community in attendance.

In 1986 the Trustees launced another expansion with fundraising to purchase two lots adjoining the museum and courthouse property. This was the beginning of the dream to build an authentic Hawaiian Living Complex, phase one of which was completed in 1996. 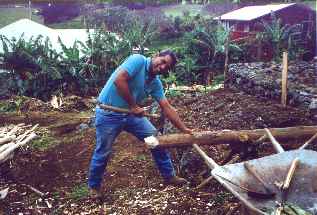 (Interestingly enough, as we found out to our shock in October, 1986 was also the year that Maui Council passed a law making thatched houses legal only on hotel zoned properties. Even though three of the four planned thatched houses are built, we are had to go through the variance process for approval of the existing Kauhale and to build the Hale Wa`a, Canoe House.) It took all of 1987 for the title to clear on the new property and cleanup of the lots was an ongoing project. The Museum saw 39,160 adult visitors and 4,486 children in the first five years after its opening.

Through the generosity of our membership, the deteriorating Old Hana Courthouse was thoroughly refurbished in 1989 and pressed back into official legal service in 1990. Even today, the Old Hana Courthouse is still used bi-monthly with the judge trecking to Hana from Wailuku.

The three years from 1989 through 1992 were quite busy from an administrative and organizational point of view. Extensive fundraising was required to meet the obligations of the land purchase, Courthouse refurbishing and creating the necessary budgets to build a new archive wing for the museum. In January of 1990, Clifford Hashimoto was hired as manager to take up some of the necessary administrative work and direct the initial computerization of member and archive records. This work was furthered by Duke Walls in 1992 when construction on the archive wing was accomplished. During this time Babes Hanchett retired after twenty years of service and new Trustees carried forward the very busy schedule for a small regional museum.

In 1993 the major work of moving and cataloging the museum collections into the archive wing was begun. Archivist Menzi Behrnd-Klodt was a frequent visitor thanks to a generous grant from the State Foundation on Culture and the Arts. A professional level Collections Management Program was established in our archive, and accessions are easily made today under this system. 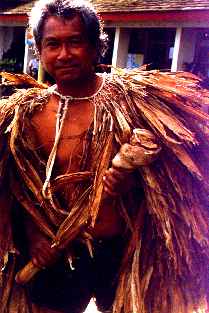 Before the last artifact and photograph had found their permanent home in the archive wing, Coila began the arduous task of preparing for the dream of ten years, the building of the Kauhale O Hana. Fortunately for the Center, Hana born Francis Sinenci appeared just when he was needed most. Sinenci was building authentic hales on Oahu and was working as a Cultural Resource Specialist when he heard of the Center's need for a Project Manager - a Kuhi Kuhipu`uone for the Kauhale O Hana.

Sinenci worked closely with hundreds of volunteers, established educational programs at the Hana School bringing students into the construction process, and performed the miracle which now stands beautifully as a completed Kauhale O Hana. He has created an authentic Hawaiian Living Complex, complete with ethno-botanical gardens.

This latest accomplishment of the Hana Cultural Center brings us to a new beginning of our center. New comprehensive educational programs are under development to utilize the Museum, the Old Hana Courthouse and Jail, and the newly completed Kauhale O Hana in service to the ongoing renaissance of our local Culture. As Babes Hanchett said when the Museum opened, "We are here to tell the story of Hana."