Back to articles' page » 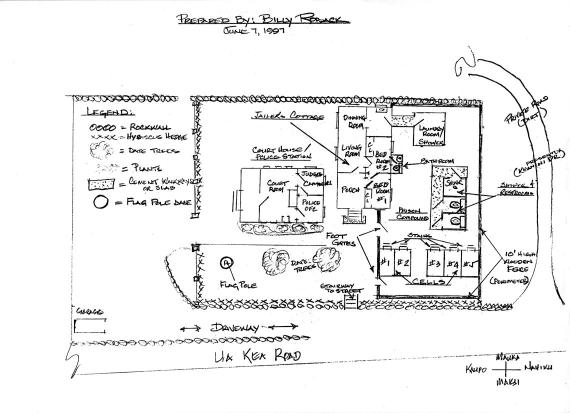 To Whom it may concern;

I am William F. Roback Jr., better known in Hana as "Billy or Uncle Billy". This is my recollection of the current property of the Hana Cultural Center on Uakea Road and Keanini Drive.

This is where I would live for the next nine years until the death of my mother Josephine in 1953.

As I recall, there were a total of seven (7) buildings which included a single car garage located on the Makai/Kaupo corner of the property at the top of the driveway. The building identified as the Courthouse and Police station. The five room Cottage which consisted of two bedrooms, lavatory, kitchen, combination living room/dining room and covered front porch. Two jail buildings that consisted of five jail cells. A building consisting of two toilets and a shower in the prison compound, and a laundry room building just off the kitchen of the cottage in the prison compound.

When we moved on to the property, the jail was still in operation. It housed those that needed to be incarcerated overnight, weekends and trustees utilized as work force for different county needs such as the care and maintenance of the property and some off property road work.

One of the things I recall was a trustee by the name of "Johnny" that would look after us when my fathers duties lead him away from the property and my mother attended church activities. In the beginning, it almost sounds like a biblical story. We were really afraid of a so called prisoner watching or looking after us however, as time went on, we found Johnny to be one of the most kind and caring person anyone could ask for. As a trustee, he was allowed some privileges such as leaving the property during the weekends and some evenings.

When Johnny returned after being out in the town (Village) he would always bring us treats (candy, ice cream etc.). He would gather his "Uke" and sing to us. He also would tell us scary ghost stories that would send us running to our bedrooms, getting under the blankets and not move until we would fall asleep. Johnny completed his time at the Hana jail and moved on with his life, needless to say we were saddened when left us because he became like one of the family to us.

After the death of my mother in April 1953, we moved from the Police cottage to our new home in Wakiu about three miles north of the Police Station. This dwelling is currently occupied by family.

In June of 1976 I returned to the property as a police officer assigned to the district with the Maui County Police Department. Also assigned to the Hana District at that time were lieutenant Ronald Ohashi, Sergeant Solomon Lee, Officers Clayton Carvalho, William Mendez, Dayton Kaaloa and myself.

On October 6, 1978 the newly constructed Hana County building that would be occupied largely by the Police at the intersection of Hana Highway and Uakea Road was completed and ready to be occupied. 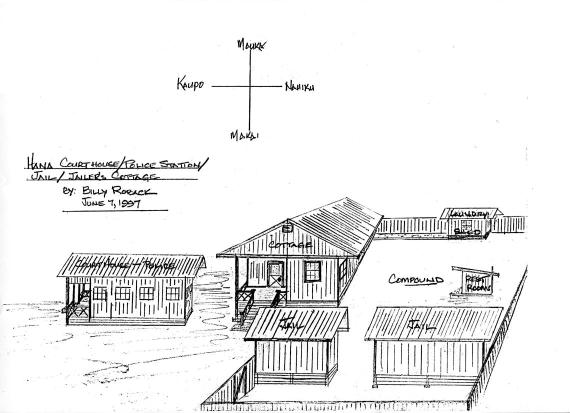 My last assignment at the old police station was to remain there until the close of business for that day at 4:30 pm and to secure the building when I left. At about 4:35 pm I closed the windows and secured the front door with the padlock. It was once again a very emotional time in my life when I did that. I recalled that day in 1953 when we left this same property to our new home in Wakiu.

As the newly elected president of the Hana Cultural Center I returned to the property on a part-time basis mainly on the dates of the board of directors meetings from 1989 to 1991.

This is my story of the Hana Courthouse, Police Station, Cottage and Jail Compound as I recall it. My connection to this property will live on for the rest of my life of the happiness, sadness and hardship during my life experiences on this property.

Enclosed are several sketches of the property and buildings as I recalled. Thank you for allowing me to tell my story of my life on this most significant and important cultural sites in Hana.